The Forth Road Bridge has featured heavily in recent news, after shear damage caused cracks during extreme weather. The bridge is the most important crossing between Fife and Edinburgh, but the severity of the problem has left the bridge closed, with repair crews working 24 hours a day.

The Forth Road Bridge (FRB) is an impressive feat in itself. Following demand for a road crossing to replace the ferry service across the Forth, it took 8 years to decide on a bridge as opposed to a tunnel, and a further 9 years to fully open. Once opened, it was the longest steel suspension bridge in Europe, with the main span measuring fractionally over 1km. It used over 200,000 tonnes of concrete and 39,000 tonnes of steel and reaches 150m above the water. Until 2008, it was a toll bridge, generating £16m a year when tolls stopped.

There’s been a lot of concern for the FRB in the last decade, long before current issues arose. Its original capacity of 30,000 vehicles in each direction per day was long passed, with the Scottish Government estimating that at least 60,000 vehicles used it on half the days of the year. This reduces the lifespan of the bridge to about 60 years. A 2005 study showed that fatigue and corrosion had caused some cables to lose 10% of their strength. This was definitely bad news, meaning that instead of lasting until the year 2080, the FRB may have to close as early as 2020. 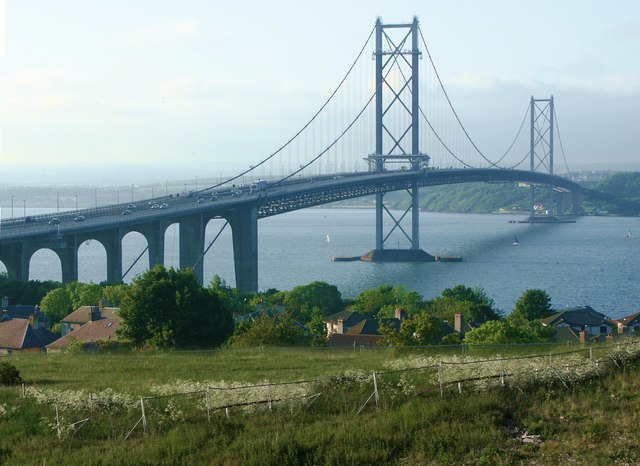 The recent closure of the FRB came when extreme weather caused a shear crack 2cms thick appeared in a beam on the Southbound carriageway. The company looking after the bridge advised that ‘an inner link support beam’ cracked badly due to an “unprecedented set of circumstances”. The risk was that the weight of the bridge was now shared among other sections which weren’t designed to cope with such loads. If a crack had subsequently occurred in the corresponding beam on the other side, the road surface would’ve dropped around 15cms.

As the FRB was already known to be overloaded and potentially needing to close by 2020, work began years ago on the Queensferry Crossing, an adjacent bridge to the FRB due to open in 2016. Interestingly, the Queensferry Crossing hasn’t made any use of Scottish or British steel. The new £1.5bn bridge has steel exclusively from China, whereas the FRB contains around 90% Scottish steel. This caused huge amounts of frustration and upset, not only due to the loss to Scottish and British businesses, but for the increased environmental impact of transporting such a weight over 12,000 miles.

West Yorkshire Steel understand that there would have been a huge number of meetings before the final decision of where to source the Queensferry Crossing’s steel was made, but we think it’s sad that something as iconic as the replacement of the Forth Road Bridge hasn’t given the full benefit to its country in terms of generating business and jobs. It seems a little amiss for such an iconic structure that’s so important to the Firth of Forth there will be nowhere stamped on it “Made in Scotland”.