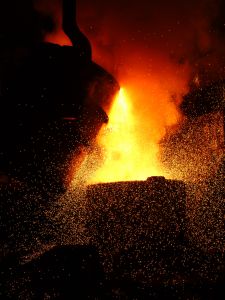 Although our business concentrates on steel, we realise that metalworking is an organic, evolving process. This process has spanned across generations, each one teaching the next to keep constantly innovating and helping mankind forward.

Without the hard work and knowledge of our ancestors, we wouldn’t be able to do the job we do and we only thought it fitting to doff the cap to a material that makes it all possible; iron.

Iron, as an element has been around for nearly 200 generations, meaning that as a material, it was known by your great-great-great-great… you get the idea. It’s so old that it’s one of the few chemical elements to have its symbol based on the original Latin name, ferrum and so has the shorthand symbol of Fe. It is chemical element number 26 and is the most common element in the make up of the planet.

The first references to iron production are in the Old Kingdom of the Egyptians, around 2.500BC. It took a while for word of the techniques to spread to Britain but somewhere between 800 and 500BC the arrowheads and spears started to appear in ‘The Iron Age’.

Industrial production is known the have started in Sheffield in the 14th Century, spreading to the Black Country by the early 16th Century before making a short journey to South Wales a few decades later.

However, the journey towards the industrial scale can be traced to a little-known forge near the grounds of Kirkstall Abbey in Leeds, not far from West Yorkshire Steel’s home. This forge has been dated back to 1152, before even the signing of the Magna Carta. It was founded by Cistercian monks and was used as a convenient way of making tools necessary to the Abbey. They used the flow from the River Aire to power the water wheel providing power for the site. This small, rudimentary plant was so successful that it survived the dissolution of the monasteries, becoming known as Kirkstall Forge and went on to become part of GKN Axles, one of the biggest employers in Leeds. Its site covered 65 acres and we at West Yorkshire Steel still have papers with order details from days before GKN closed the site in 2008.

The modern world relies heavily on technical innovations in metallurgy so that our buildings grow taller, our electronics become smaller and our cars become safer. However, it’s worth remembering that every time somebody took a step forward, it was because of the knowledge gained by these early iron smelters, without whom the Industrial Revolution would’ve been impossible and our lives would be radically different.

Working in iron was the basis from which we built our world it’s worth remembering that the steel in which we rely is iron alloyed with carbon; but that’s another story…