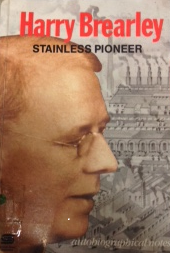 There are some inventions that changed the world. We think of the motor car, the wind-up radio and the disposable razor; which all had massive effects on the world, changing the essence of their fields.

Some inventions are so fundamental it’s difficult to see how we got on before them. We tend to think of these as discoveries.

This year is the centenary of a discovery by Harry Brearley, a Yorkshireman born in February 1871. His early life was humble, he and seven siblings shared a two bedroom back to back in Sheffield with their parents. Work life was difficult, starting as a steel factory cellar lad working 13-hour days, before becoming a bottle washer in the laboratory.

The lab suited Harry, and he was soon working as an analyst on tool and high-speed steels. His knowledge expanded and he became a respected authority on special steels. He wrote books, studies and even travelled to the steel mills of Riga, Russia at a time when seaside vacationers were considered “well travelled”.

He returned from Russia to be appointed as the Head of Research at the Brown-Firth Research Laboratory, making special note of the erosion and fouling of rifle barrels. Part of his research lead him to produce steels with varying inputs of carbon and chromium.

Harry’s magic numbers were 0.24% carbon and 12.8% chromium. During microscopic observations of this particular sample, he found that they simply wouldn’t etch. Etching is a form of corrosion, which he put to test with vinegar and food acids. This was a non-corrosive steel, specifically a stainless steel.

Almost all modern cutlery is stainless steel, but adoption by Sheffield’s manufacturers very nearly didn’t happen. Due to the difficulty in forging and grinding the steel into items suitable for the dinner table, it was declared, “rustlessness is not so great a virtue in cutlery, which of necessity, must be cleaned after each using!”

Thankfully, Brearley’s resolve was as strong as his discovery. He carried on championing his product and it was recognised as a one of great potential for not only tableware, but for the medical profession. Medicine had undergone a leap forward compared to the previous century and the ability to craft medical instruments from a non-corrosive material allowed for sterile and hygienic implements.

Brearley’s early versions were of a martensitic stainless, but the austenitic stainless steel wasn’t far behind, and the world really was never the same again.

By the centenary of stainless steel’s birth, its use is almost world-dominating. Without Brearley, it would be impossible to maintain the standards of hygiene that allow modern medicine, food production or households to function.

No matter where you are, somewhere near you, big or small, long or short there is an item made from stainless steel. The name that should be on everyone’s lips this centenary year is Harry Brearley, and we thank you, the Yorkshire lad done good.