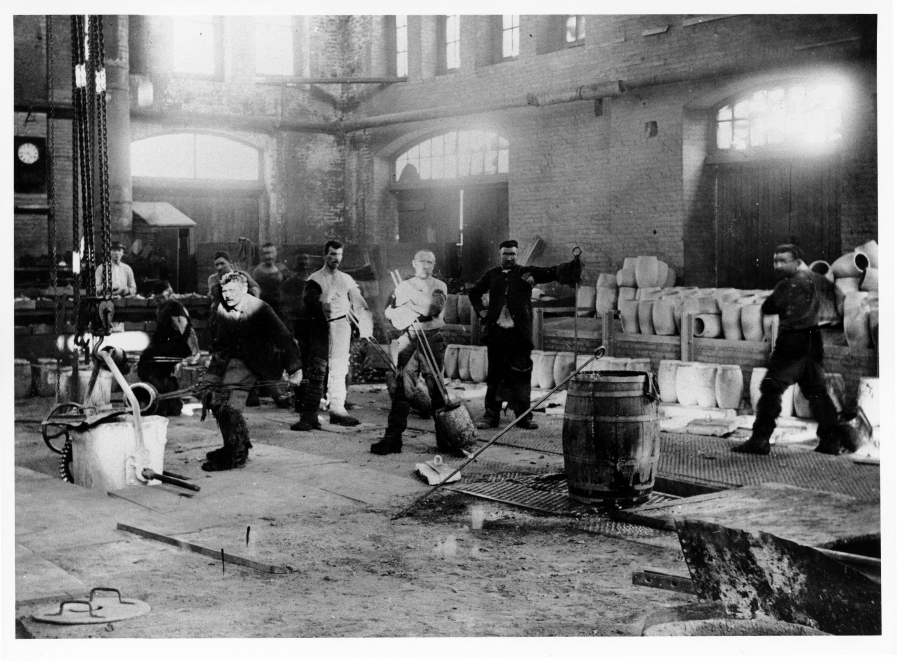 In the corner of the West Yorkshire Steel reception next to a rather pretty aspidistra is an old crucible. It’s a small clay pot which was made for melting cast steel and iron.

I took it from a derelict old iron foundry just outside Oughtibridge near Sheffield in the late 1970s. There were hundreds of them strewn outside the back of the deserted factory. Most were broken, although some were still intact but too heavy to handle due the accumulation of years of slag and molten bits of iron attached inside and out. The rest are probably buried under the foundations of the new starter homes which now stand on the site.

The method of steel making using crucibles was developed by Benjamin Huntsman at his clock making works in Doncaster in 1740. He soon moved to a steel works at Handsworth near Sheffield, where he started producing high quality cast steel in his crucibles. A flux was added and the filled crucibles were covered and heated on coke fires for about three hours. The molten steel was then poured into moulds and the crucibles were reused. His steel wasn’t popular in England though, due to its level of hardness, so the majority of it was exported to France. Huntsman never patented his method of steel making, so inevitably it was soon copied by many other manufactures, there are stories that the idea may have been taken in a rather unscrupious manner. In 1770, he moved his enterprise to Attercliffe, in the Northeast of the city where he prospered for another six years. When Benjamin Huntsman died in 1776 the business was taken over by his son, William Huntsman (1733–1809).

We still have in our records, details of ‘B Huntsman Ltd’ at Tinsley Park Road, Sheffield 9 from the 1950’s, they show the grades they produced such as Blue, Red and Yellow label, Blue and White, and BCW.

I remember the crucible works in Sheffield where lines of 12 crucibles were set into the floor, being heated. They were removed by two men dressed in leather aprons for protection from the hot metal. The molten steel was poured by hand into moulds to produce ingots for forging. This method of production continued into the 1980s. Due to the small size of crucibles they were normally used to produce small batches of very high quality product. Our crucible has an internal diameter of 200mm and a depth of 350mm. By my calculations this would be able to hold about 80 kilos of molten metal. This is about the limit that could be lifted by two men.

The crucible method of manufacturing gave its name to the birth of a new steel company. In 1876 the Sanderson brothers of Sheffield, England founded a steel manufacturing facility in Syracuse, New York. The Sanderson facility was one of the thirteen plants that formed the Crucible Steel Company.

Today it may be just a clay pot standing in a corner, but that little gem holds the secrets of over 270 years of steel making history. Look out for it if you ever call in.

One response to “A Crucible of Steel History”