When dealing with the standardised steel specifications, many still quote BS970 as a yardstick, without contemplating where it came from, only knowing that it refers to carbon, alloy and stainless steel.

During the Second World War, the Technical Advisory Committee of the Steel Control of the Ministry of Supply were commissioned to review special and alloy steels, so that they were fit for their uses in war conditions. Working with the expertise of chairman Dr William A Hatfield (1882 – 1943), and the British Standards Institute, they created a method of quantifying steel specifications to the British Standard, hence the ‘BS’ mark. Dr Hatfield was chief metallurgist of Firth Brown Research Laboratories, succeeding Harry Brearley, inventor of stainless steel. Dr Hatfield went on to invent his own 18/8 austenitic stainless steel.

The Committee and the BSI came up with the War Emergency British Standard Specifications, which for ease of use were called the BS970 EN. The story goes that the ‘EN’ refers to ‘Emergency Number’ although there’s no written evidence supporting this theory. The scope of the codes covered 58 steel specifications, from the EN1 Carbon Steel to EN58 Stainless Steel. The previous British Standard 5005 covered many of these steels as a code and many were very similar to the BS 970 EN. 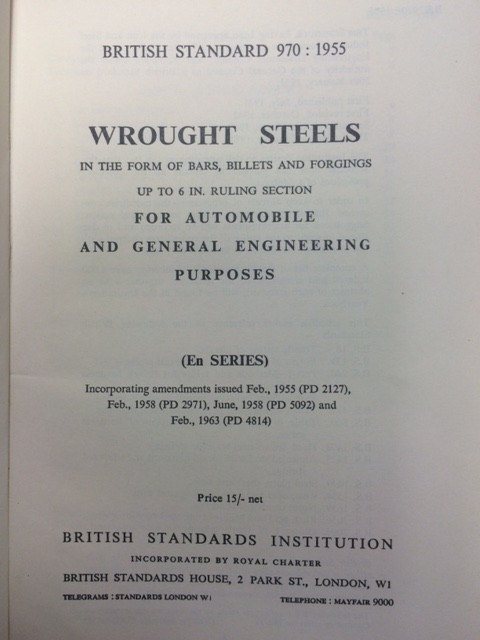 After the War, the specifications had to be updated to keep up to speed with modern technological pace. By 1955, many of the codes had to be revised to keep tighter controlled chemical compositions, but the original codes didn’t allow for expansion.  To keep the codes’ internal coherency, additional suffixes were applied to the 1941 works, so BS970EN36 would have EN36A, 36B, 36C and so on. This allowed nearly 200 variations to the specifications.

However, technology and research carried on, and by the 1970’s it was necessary to review the codes again. The system of suffixes had become overstrained to the point that any logic they were designed to keep was in danger of being lost. Instead, a radical overhaul was needed, using a six-digit key of three numbers, a letter and two further numbers; for instance ‘EN8’ became ‘080M40’. The system became very popular in UK industry, but by the 1980’s it started to compete with the grading used on the continent. The European grades were either five-digits (e.g. 1.2379 – the Werkstoff Number) or alphanumeric (e.g. X155CrVMo12-1 – the Kurzname), and the European systems were eventually introduced to the UK in 1991. The BS970 itself was superseded by more than one of he BS EN standards, such as BS EN 10083.

By 2006, the use of BS970 was over.  Although it was officially withdrawn, it remains popular with steel makers all over the world, who still manufacture to the more popular BS970 specifications. Although not officially recognised, it highlights the effectiveness of the system that it’s still used as the measure of the item. In the same way that earthquakes are no longer measured using the Richter scale, yet it’s the most widely used method as it’s the one most commonly understood; the same principle applies to the BS970.