While the name is unfamiliar to many, 2013 would have been Henry Bessemer’s 200th birthday.  Henry was born January 19th, 1813, the son of Anthony Bessemer.  Anthony was a successful man himself, a member of the French Academy of Science and inventor of the portrait lathe for the Paris Mint.  Anthony returned to England during the French Revolution and began a die-stamping business which also made gold chains.  With his wealth, he built his family home and own type foundry in Hertfordshire.

It was this foundry that inspired Henry’s path and when the foundry moved to London in 1830, 17 year-old Henry went too. Here Henry found a way to recycle carbon dust into pencils and created movable dies for embossing deeds.  While his work was very useful, it was a ‘Gold Paint’ made from very fine brass powder that was his big financial success. He was fiercely secretive of this process, protecting it from imitators, even though Bessemer’s Gold Paint only sold for a shilling.

Following this, Bessemer turned his hand to sheet glass, and although his success wasn’t replicated he sold his production process for £6,000 to the company which supplied glass for the Crystal Palace. It was during the Crystal Palace Great Exhibition that Henry won a prize medal for a machine to extract juice from sugar cane.

It was this kind of engineering, problem-solving mindset that encouraged Henry to try and improve Crimean War ordnance from cast iron into stronger materials, such as malleable iron or steel. In 1856 Bessemer melted 700lbs of iron in a stationary converter to produce a malleable iron ingot. After reproduction in The Times, licences were granted to produce steel in this process, but the licences were short lived. Defects in the metal were reported, rendering it much less desirable. It was metallurgist Robert Mushet who found that the product was over-oxidised and over the course of two years and many arguments, Bessemer worked to improve both the final product and lower the financial costs of production. 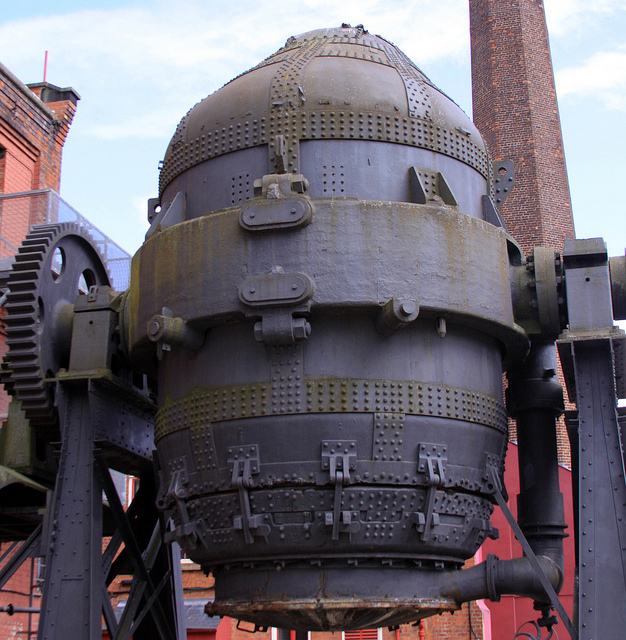 Henry Bessemer found trouble in getting widespread confidence in backing his ideas with either time or money. In 1858 he convinced two partners to set up his own Steel Works in Sheffield. It very quickly paid off. Bessemer was awarded the Telford Gold Medal and a membership to the Institution of Civil Engineers in 1859 following presentation of a paper. By 1862 the International Exhibition gave Henry’s Converting iron to steel a prize medal and the Bessemer process started to bring his Steel Works great success.

Henry went on to be given the Albert Medal from the Royal Society of Arts, became President of the Iron and Steel Institute in 1871 and gave his name to the Bessemer Gold Medal which was presented to Robert Mushet in 1876. The largest item to ever carry Henry’s name was the ‘SS Bessemer’, for which Henry designed a hydraulic stabiliser to prevent occupants of the saloon becoming seasick.

Although unsuccessful, it’s a small failing on a record which contains over 100 patents, a Fellowship to the Royal Society and being made a Freeman of the City of London. Shortly after, Henry became Sir Henry Bessemer in 1879. He lived with his wife in Highgate until his death in 1898.

For the number of awards, accolades and commendations Sir Henry received during his lifetime, he could have been a superstar of his time. Instead, however, he’s remembered best not as a man, but in the contributions that he made, not only to his field, but to the awards and processes which still carry his name.