At one time, the manufacture of metals was the sole preserve of single craftsmen. Blacksmiths worked all day in front of a large fire, hammer in one hand and an anvil at his feet. As things moved on to the Industrial Revolution, the manufacture of steel had moved into large foundries and the race to produce more, faster and better quality was moving into overdrive.

All of a sudden, the experience that blacksmiths gained over a lifetime was being logged, distilled and improved by scientists. Chemists were very quickly becoming sought after and highly in demand to identify and solve the problems of varying quality in iron and steel stock and influencing the direction the industry would take for years. One such man was the larger than life Dr William Baker. 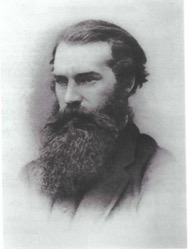 Baker was born to a gun-maker in London in 1830 and his young life is not particularly well-known or remarkable. He was, however, clearly an adept and driven student and in his early twenties, he was made a fellow of the Chemistry Society and an Associate of the Royal School of Mines where he studied under Dr John Percy.

Baker worked and served for many years as a Lecturer in Chemistry at the Collegiate School in Sheffield, contributing to a number of projects, including working with Dr Percy on his reference work Metallurgy in 1864. Working on such projects may well have lead Baker to recognise the importance of identifying good quality materials in terms of chemical composition, and he somewhat unexpectedly left to set up his own firm and work as an Analytical Chemist.

He authored several patents that were based around chemistry, many of which were commercially successful. He worked with a number of different materials, setting his chemist’ point of view to good use and managing to remove foreign substances, purifying and refining his principles. His attention was turned to steel when he was tasked in removing unwanted nitrogen from steel samples.

His greatest challenge went on for the last years of his life, when he turned his attention to the ‘Phosphorus Problem’. The Bessemer process – as it was used at the time – wasn’t capable of removing the excess phosphorus from the source iron, which meant that the amount of iron suitable for working into steel was severely limited. Baker’s rather zealous approach to finding a solution for its removal led to a series of more and more elaborate experiments, none of which were successful. His plans grew grander, but was forced to admit in a lecture that it would take somebody with greater resources to solve the problem.

Baker died in a tragic accident-come-prank. In 1878, only months after his lecture, he had spent the evening with friends at the Sheffield Club, when upon leaving the billiard room, he was overcome by exuberance and ran across the hall to leap onto the bannister. As reported in the Sheffield and Rotherham Independent, “The freak seized him to throw himself across the bannisters to slide down them, a custom common enough with boys at school”.

Unfortunately, at 48 years old, he was much larger than a schoolboy and overbalanced, falling three floors and injuring himself badly. He died in hospital sometime later.

Although Baker isn’t a hugely well-known name, even within the field of metallurgy, he was the embodiment of a new way of thinking; he tried to use a chemist’s mentality to solve the inherent problems or working with certain materials, to use science to create better quality and usable materials that would previously have been unsuitable and he did it all with a larger than life persona. He may not be well remembered, but we salute him for his work.