One of our heroes at West Yorkshire Steel is the often-mentioned Harry Brearley, as he created the first version of Stainless Steel (or as he knew it, rustless steel), which we now know as a martensitic type stainless. A man with vision and knowledge that quite literally may be called the very reason we’re here.

As clever as Harry was, it’s actually his successor at the Brown Firth Research Laboratories that could be classed as having the most widespread influence in the field. Dr William H Hatfield is the man that discovered what’s commonly known as 304 stainless, which happens to be the most widely used stainless steel in the world today.

It’s always nice to imagine that some of the things that changed the world happened almost by accident by the inventor in the potting shed; this is most definitely not the case for Dr Hatfield! Born in Sheffield in 1882, he attended University College, Sheffield to study metallurgy. His continued research through metallurgy and specifically into steel earned him his Doctorate in 1913, naturally making him a Doctor of Metallurgy. By 1916 he was appointed as Director at Brown Firth’s and readily continued Brearley’s research into stainless steel. This was no lucky happening; Hatfield was a man with a real passion and enviable devotion to his craft. 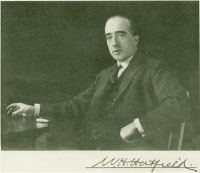 After some years, in 1924 he discovered the ideal composition for a corrosion resistant stainless steel, the 18-8, so named because of the 18% chromium and 8% nickel content. This was perfect for uses of stainless steel that didn’t have a cutting edge and was quickly produced and used in great quantities under the name ‘Staybrite’ steel. In just four short years, Hatfield found during a trip to the USA that his steel was being mass-produced and had even found its way as a material for engine components at the Ford Motor Company.

Hatfield continued his research and devotion to his craft and went on to develop a titanium stabilised stainless steel. This particular stainless was more suitable for welding and high-temperature exposure, as the addition of titanium reduced or even eliminated the chromium carbide precipitation that had previously caused problems during certain uses. This steel is also now widely mass-produced as the 321 stainless austenitic.

Although the stainless world exists because of Harry Brearley, it could easily be said that the most wide-reaching developments came around because of William Hatfield. The legacy that he left is truly astounding, as due to the work of one man, every non-magnetic, rust resistant stainless steel object that we see, use and take for granted is an 18-8 type as crafted by Dr Hatfield. His wide ranging work and authoring of numerous technical papers on the metallurgy of steel raise him as one of the great figures in the field, commemorated each year by Sheffield University’s annual Hatfield Memorial Lecture.

Doctor Hatfield, we thank you!