As long as we’ve known about metals, we’ve been creating tools that allow us to deal with them; we’ve put a huge amount of effort into heating, refining, shaping, grinding, cutting and attaching metals together and at this point there really is an appropriate tool for every job. Some do the job quickly, others precisely but there’s always a ‘right way’.

One of our favourite tools used by West Yorkshire Steel is one that can cut quickly, cleanly and very precisely – the plasma cutter. We can apply the plasma cutting process to any number of our stainless steel plates, because it not only cuts quickly and accurately, but it doesn’t affect the stainless steel’s ability to withstand moisture or corrosion. The plasma cutter not only slices through cleanly, but doesn’t require reworking as many other blade cut metals do to remove uneven edges or burrs, as you may find with blade cut pieces. 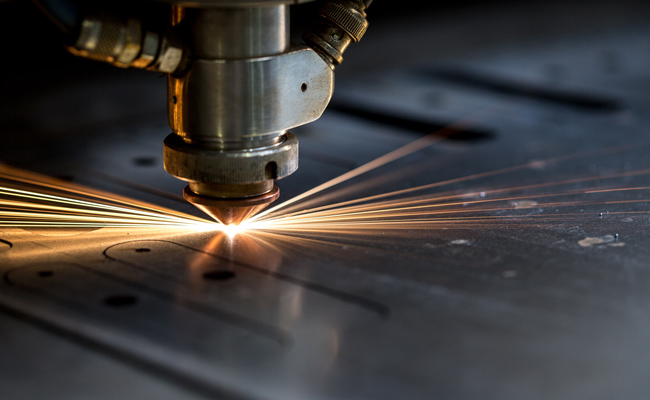 It’s the perfect tool for a cutting many stainless steel pieces into exact sizes, but how does it work? It would seem like quite a futuristic process, with robots and green lasers effortlessly slicing blocks of steel in two, but in fact, plasma cutting came out of a welding process, i.e. joining metals together! Plasma Arc Welding and Plasma Cutting both have the same principle of using a channel of charged compressed gas that has been superheated to form ‘plasma’.

Put simply, compressed gas, which depending on the cutter could be oxygen, air or even inert gas as would be used in welding, is forced through a high compression nozzle towards the steel to be cut. There’s an electrode within the nozzle that forms an arc between the nozzle, the steel and the grounding plate. This electrode charges and ionizes the gas and creates a channel of plasma that conducts electricity, creating enough energy and heat as it travels through the steel to melt the metal. The benefit of using compressed gas is that as the steel is heated and loses it solidity, the compressed gas blows it clean away from the cut line, preventing it from cooling and re-joining the plates back together.

While plasma arc welding has been with us since the 1960s, the process of cutting wasn’t considered viable until many years after, when we started to want larger, specialised and more precise equipment. Some of the world’s biggest plants have large, computer controlled plasma cutters that can form shapes in steel that wouldn’t be feasible to be done by human hands.

The good news for those who need precision cut steel is that plasma cutters have become smaller, more efficient and more capable since the 1990s. Nozzles have become thinner, producing a finer arc than many would have given credit for when the process was first introduced! We’re big fans of the plasma cutter, and while we await the day when the robots and green lasers become a regular tool of metalworking, we’re more than happy to keep using the rather impressive piece of equipment we have!