Many items around the home owe a lot to the metallurgy that helped produce them, but have now become so everyday and commonplace that we no longer appreciate them or place any thought into how they do what they do.

One such item is the humble mirror; it’s easy to think that it’s purely a glass item, hence the slightly archaic term ‘looking-glass’. It is, however, another impressive show of modern precision methods of working with metal.

A mirror achieves its purpose by absorbing none of the light waves that hit its surface, instead reflecting them away again with the original quality of the light intact. The surface of water does this to some extent, which is probably the earliest form of mirror that we noticed. Other early mirrors would have been made from obsidian (a volcanic rock formed underwater and cooled very fast to give it a glassy, reflective surface), polished copper, polished bronze and even gold leaf. 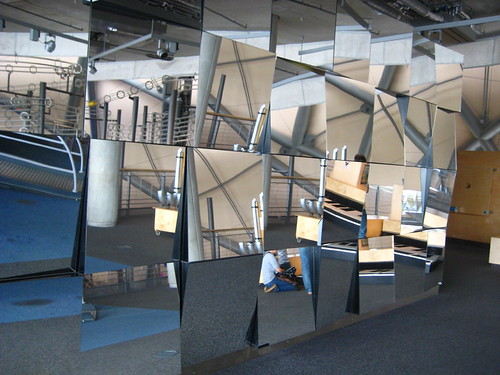 The first steps towards modern mirrors were in China around 500AD. Silver-mercury amalgams have much closer reflective qualities of the mirrors we know today, but it took until the Renaissance to get a glass-coated tin and mercury amalgam to act as the kind of item we would now call ‘a mirror’.

In 1835 a German chemist called Justin von Liebig invented a method of attaching a layer of silver onto glass by using a reduction of silver nitrate. Interestingly, most modern mirrors still use silver, but first place a layer of Tin (II) chloride directly onto the glass as silver won’t bond directly with the glass plate. After this an activator makes the silver/tin harden, and the back is painted to protect the reflective coating now held to the back of the glass.

Mirrors are an example of a small item from metallurgy that has shaped our modern world far more than we recognize. The use of periscopes in the trenches of the First World War meant soldiers no longer needed to place themselves in danger by exiting a trench, potentially into the line of fire. Mirrors are fitted to every car and are used every day by millions to make sure that driving is safe and practical. Modern buildings have mirrored faces to reflect light back into the street and help light and heat circulate throughout cities.

Mirrors are even leading the way in terms of renewable power, where solar rays are reflected and concentrated on a fixed point to create the steam used to turn a turbine and make clean energy.

Without dedicated metallurgists working to make the most of the properties in the materials they have available, we may have a very different world not only behind us, but ahead of us and the next time somebody appears lost in a mirror, they may not be vain but simply appreciating a little bit of a marvel in metallurgy.