Few would deny the North of England played a huge part in Britain’s industrialisation. However, Yorkshire has been home to some of the most exciting developments seen in metallurgy, from Brearley’s invention of stainless steel, through to Hadfield’s discovery of manganese steel. It’s true to say that Yorkshire is very important to the world of metals – but what may be overlooked is how important metallurgy is to the people of Yorkshire.

The industrial actions and trouble of the 70’s and 80’s have their own place in history; most people know about the scenes at the Orgreave Coking Plant during the Miners’ Strike between ’84 and ’85 but the first stand-off was years earlier, at the turn of 1980 outside the Hadfield’s East Hecla Works. Here, the nationalised British Steel Corporation’s plants were shut down after 90,000 members of the largest union went on strike to support a 20% pay rise claim.

Although the pay request was high, it was due to the workers increasing the industry productivity by 7% and 8% consecutively over the previous two years. The workers were offered a 6% rise with a number of ‘unacceptable strings attached’. This figure was also based on fresh productivity deals and didn’t take into account the exceptional rise the two years previous.

At the time, the Hadfield site was privately owned and chairman Derek Norton took the unprecedented step of picketing the picketers. Taking 120 people in coaches to London, they give the Union a week to get round the discussion table or a vote would be made to go back to work. He also offered Hadfield’s profits to the strikers’ hardship fund if they let the firm continue working; the reasoning being that closing the site would give the company losses of £2million a month. 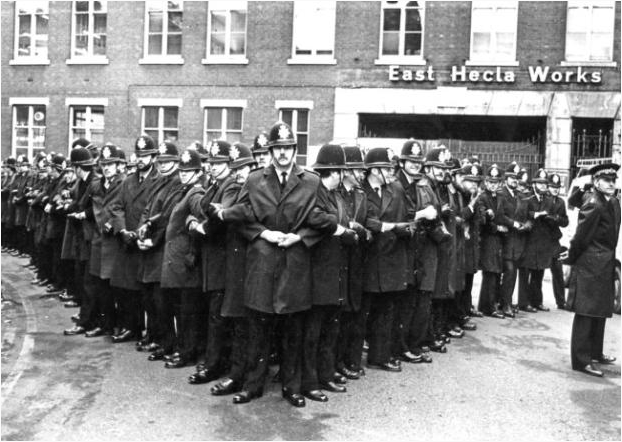 As it turned out, the bargaining was for nought. The East Hecla workers started back on February 11th, 1980, which caused unrest among the rest of the pickets. A few days later, huge protests involving over 1,500 people tried to close the plant and caused the police to become heavily involved. During a short burst of chaos, 600 police officers turned up and 60 arrests were made.

Eventually, after over 3 months of strike action, a revised package worth 16% was offered and accepted by the Unions and workers. Nowadays, 16% would be unthinkable, but it’s indicative of the level of integration that steel had with the country; it’s the material that entire workforces and communities were built upon and the connection the workforce had with the product was enviable. Because it came from the land where they lived, it belonged to them as much as anybody else; for those who made it, it was a matter of pride to turn out some of the finest steel in the world and any upshot in productivity for the product was just as much to the credit of the workforce as it was to the company.