We admit that there’s a lot of terminology around processing steel and the engineering that is involved, which can be confusing! To help, we have a glossary page full of terms that you may not feel are instantly obvious in their meaning, but one term that often gets a confused look is for ‘flame cut steel’. A flame is something that we think of as small, in everything from an open flame fire to the famous Flame-grilled Whopper, so would it really be sufficient to cut through a strong, tough steel?

It is possible to slice through steel with a flame, but it’s a slightly more intense one that you’d use to roast marshmallows. Flame cutting is also known by another few names, such as oxy-fuel cutting or oxyacetylene cutters and torches. As can be the case with many of these technologies, flame cutting can also be altered to become a form of welding, so it can either fuse metal or break it apart! 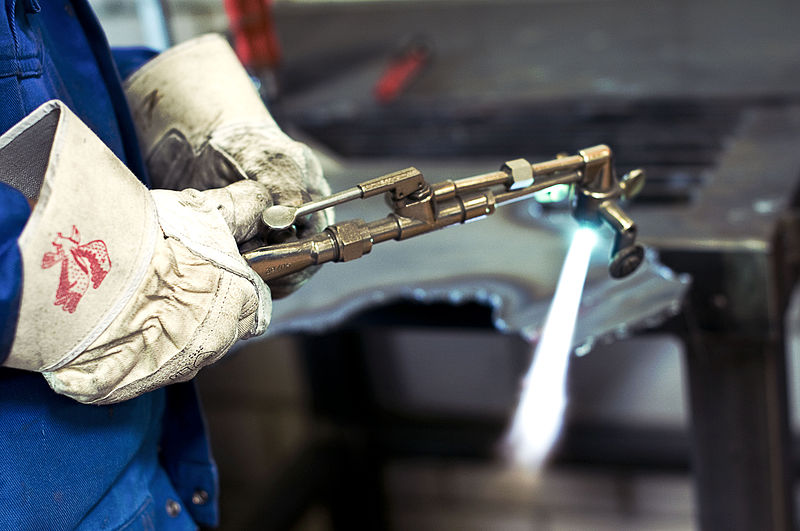 The problem with using an ordinary flame to cut metal is that it’s simply not hot or strong enough to do it. The air we breathe is approximately 78% nitrogen and 19% oxygen, with the rest being made up of a concoction of gases. If you use pure oxygen, however, you provide far greater levels of combustion, the temperature rises significantly and by concentrating that heat into one place, you localise the melting point to a very small area and have a cutting blade made of extremely hot fire!

All flame cutting equipment requires two tanks and a lot of care and attention! Concentrated tanks of fuel and pure oxygen are needed to make sure that combustion is centred on the desired area, whether you’re using it to join or split metals – interestingly, you can’t use the same piece of equipment to do both jobs. An oxy-fuel cutter needs an second oxygen release valve in order to ‘blast’ the area with O2, and raise the temperature high enough to localise the heat to act as a cutter.

Flame cutters are often fuelled by acetylene, hence why they’re sometimes generically referred to as oxyacetylene torches. The flame from this particular fuel can range from around 3,200°C-3,500°C which is hotter than many other fuels and perfect for efficiently cutting through steel. There are oxy-fuel cutters that use hydrogen, however. Oxy-hydrogen cutting equipment is used in the marine industries, as hydrogen can be used at greater pressures than acetylene, meaning that working at depth is easier. Oxyhydrogen cutters are also quite useful for aluminium, which needs a lower temperature than steel.

There are some remote areas that find it difficult to transport these fuels to, so a form of oxy-gasoline cutting has become popular. The principle is the same and petrol is supplied from a pressurised fuel tank onto a blast oxygen stream and it can cut plate steel up to 13mm thick at the same rate as an oxyacetylene nozzle.

We’re fans of keeping things simple, so we refer to a flame cut steel because it’s a fairly accurate representation of what the process involves! Although when you peek behind the terminology, you often find that the process is a lot more interesting than the name would suggest.