Steel is strong, safe and can be exceptionally environmentally friendly, as it’s one of the few products that is fully recyclable. We’re such big fans of recycling in fact, we’re going to recycle the same joke from our first blog on Men of Stainless Steel and prove that these men are better than both Iron Man and Superman as they’re stronger and corrosion resistant.

The steel as discovered by Brearley (and also independently by American businessman Elwood Haynes) is now known as a martensitic steel. Although we know that Guillet identified the three main groups of stainless, Christian Dantsizen discovered the first steel that we now identify as ferritic. His ferrous alloy used around 14-16% chromium but as little as 0.07% carbon and although it was fully corrosion resistant, it couldn’t be hardened using heat treatment, which set it fully apart from the previous ‘cutlery’ alloys and rustless steels.

The field of stainless steel has had many contributors, but once the principles and uses of the product were recognised, the acceleration was rapid. Within 25 years it had gone from the subject of a French metallurgy magazine article to a full-blown scientific treatise, as published by John Henry Gill Monypenny. Working in the heart of the British steel industry, Sheffield, he was Chief of Research at Brown Bayley’s Steel Works and his work ‘Stainless Irons & Steel’ was a landmark event for stainless steel.

Only a few short years after Monypenny’s work was published, Walter Chrysler and William Van Alen built the Chrysler building, which in 1930 broke the world record as the world’s tallest building. It was the first to make use of great amounts of stainless steel; using stainless steel decoratively in cladding the dome as well as parts of the structure to show its strength. The Chrysler Building remains world-renowned today and is still one of the leading icons extolling the virtues of stainless steel. 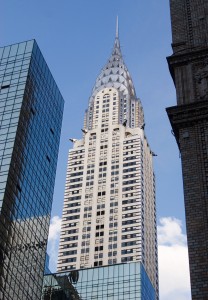 At the same time as the Chrysler building was under construction, the team at Avesta Ironworks in Sweden were still developing the products available to them and going on to discover hybrid steel, which was a mixture of ferritic and austenitic steel, which they named Duplex Stainless Steel. Duplex was superior to its constituent steels as it combined the best of both worlds, being stronger and less prone to chloride stress corrosion cracking.

The last name on our list of noteworthy and celebrated figures is William Krivsky, who invented the Argon-Oxygen Debarburization process. He found that by diluting the oxygen with argon, it was possible to reduce the carbon content to levels of less than 0.03%. This not only represented a giant leap forward, but a great simplification of the process, as the results were reliable and replicable, allowing for more consistency in the final product. The 18/8 steel, which remains a hugely popular grade to this day, could be made in half the time and the final product was cleaner when compared to the processes used previously.

The almost meteoric rise of stainless steel directly relates to how useful and practical a product it has been. Stainless steel’s touch can be felt in every sector, from building and construction to deep sea drilling to exquisitely fine surgical equipment. The modern world likes to think that we’re as clever as we’re going to get and all things that are important have already been discovered, but at West Yorkshire Steel, we’re really excited by the hope that in a few short years, we could be writing another blog that adds another name to be celebrated as a Person Of Stainless Steel.