West Yorkshire Steel has a strong respect for engineering and innovation, along with a soft spot for forward thinkers and mavericks! History is littered examples of those ahead of their time, but while the names of Einstein and Turing have been appreciated for their vision, it’s possible you’re unfamiliar with Sir Frank Whittle, despite potentially relying on his invention.

Advanced thinking
While we think of jet engines as thoroughly modern, in truth they were conceptualised in the 1920s by the aforementioned Mr Whittle. Frank Whittle started as a RAF Aircraft Apprentice and then studied engineering at Cambridge University, earning a First. Having studied aircraft engine theory, he realised it was possible to build significantly faster planes by moving away from piston-based engines, and he took his ideas to the British Government in 1929.

The theory behind the new engines meant a massive and fundamental shift in thinking – and this was potentially why the importance wasn’t immediately grasped by the Government and the plans were rejected. Without investment, development wasn’t possible and the patents expired just a few years later.

Power Jets
Frank Whittle had some devoted friends and his former colleagues and servicemen acted as fundraisers on his behalf, allowing him to set up Power Jets Ltd in 1936. The development of the engine faced the usual barriers, with some sceptical of the concept, but he slowly convinced fellow engineers and created enthusiastic advocates.

Within the space of a few short years, Frank Whittle’s team had made huge leaps from concept to execution, but by this time, the German government – or Reichsluftfahrtministerium – was also funding research by Wagner and von Ohain. The UK’s Aeronautical Research Committee was also funding research, but into an alternative design than Power Jets Ltd’s work.

While we think of jet engines as thoroughly modern, in truth they were conceptualised in the 1920s by Frank Whittle 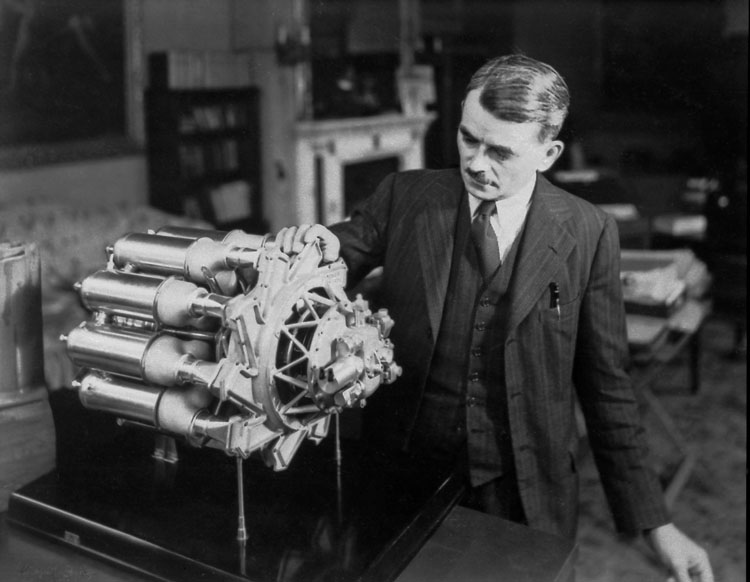 The Second World War
The Second World War meant that the British Government soon stepped in, bringing together Power Jets Ltd with Rover to work jointly. For Mr Whittle, the progress and work was frustratingly slow, potentially because while the importance of the work was understood, the scope was not. The much needed Government funding came with the cost of constant oversight and the team was forced to report to other companies, explaining cutting edge mathematics and physics to people with very limited understanding, which caused great tension.

Frustrations spilled over when the Air Ministry made the decision that all production should be handled by carmaker Rover, as opposed to Power Jets Ltd. It became a mission for Mr Whittle to convince them to develop and build the jet engine to his original concept, as Rover’s numerous changes led to a number of dead ends and they failed to build an engine capable of flying. It’s believed that the stress of this period took an increasingly heavy toll on Frank.

Despite some dangerous work, including numerous jet fuel fires, in 1941 the W1 engine powered a short burst of flight of a few hundred yards. A week later, the same engine beat the Spitfire by flying at 370mph at 25,000 feet. Churchill himself was suitably impressed enough to ask why a thousand planes hadn’t already been constructed.
It seems that by the time Britain was able to commit to putting large scale jet planes into production, the war was effectively over. By 1945, Britain was in a precarious financial state and neither the will nor the funding for further development were available. The jet engine designs were given to the Americans and the now Sir Frank Whittle moved there at what would become a major world industry.

The jet engine is an amazing convergence of technology, bringing together principles from mathematics, physics, metallurgy, aerodynamics and numerous other fields. While everyone is familiar with what a jet engine can do, it’s entirely possible that only a few people appreciate the vision that started with a small team and a genius concept that quite literally changed the world.