It’s an unusual quirk of the language that we can take one word as a description and all of a sudden it’s taken on an entirely new meaning. Google for instance, was originally a noun but suddenly became a verb – as in “Let me Google that for you”.

Another example is the way that we still use the term ‘silverware’ to mean cutlery, when in fact most modern cutlery is made from good old stainless steel. It’s just one of those words that seems to hang on, long after the rest of the world has moved on.

Silverware, as we’ll see later, was actually an accurate word at one point, but the earliest forks were made from a variety of materials and weren’t used for eating with, but as a serving implement. The history of them is a little foggy, but the name ‘fork’ comes from ‘furca’, which we would know as a pitchfork. Table forks appear to begin in the first millennium AD and came from the Byzantine Empire; the wife of Otto II used one at a banquet and astounded the Western hosts!

The use of the fork as cutlery then spread through Italy and to northern Europe and into Britain over the next few hundred years. By the 16th Century, Sheffield was a city famous for the manufacture of cutlery. The problem was that these small implements were made from ordinary carbon steel, which reacted to oxygen rich or damp environments and began to oxidise or rust. Unless the forks were frequently polished, they began to rust which caused problems with both hygiene and tainting the food. 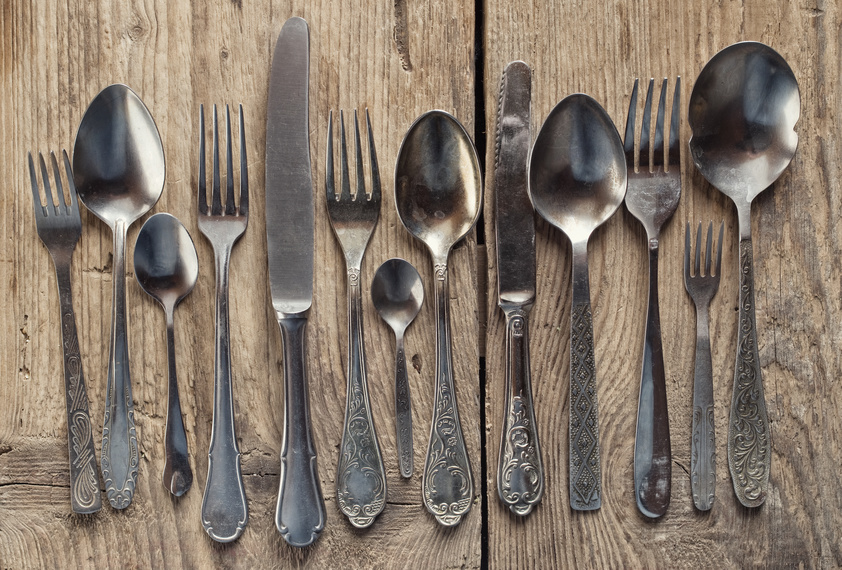 Silver was already known at this point to be a less reactive substance, but the problem was the sheer expense involved in taking silver and using it to create eating implements. Many families in fact had two sets of cutlery, with ordinary, everyday use items and then the ‘best silverware’.

It was actually our old friend Harry Brearley who allowed families to have robust and hygienic pieces as tableware when he ‘accidentally’ discovered stainless steel. Brearley was a Sheffield boy, so when he invented what he originally called ‘rustless’ steel, the thought of using it for cooking and dining tools wasn’t too far behind. His major problem was that the suggestion of using it for dining and cooking tools wasn’t taken seriously, as most cutlery was washed and dried straight after use, so a rustless steel wasn’t a priority. It was only when stainless steel started to be used in surgical procedures that the amazing hygienic properties were fully understood.

Even today, many families have some heirloom silver cutlery that is used ‘only for best’, relying instead on the affordable and unreactive stainless steel knives and forks for everyday use. Thanks to the low cost of stainless steel cutlery, we’ve seen a general increase in food hygiene in the home, which has meant better public health. Although it’d be nice to give stainless steel its due in this regard, as it has a lovely lustre and can have a highly polished finish, we won’t upset for those who still call it silverware!