Growing up, we all used to know a kid that was ‘as hard as nails’, which we understood to mean that they were pretty tough, but did we ever really question how hard that was? For those kids who really loved their science, they could refer to the Mohs hardness scale, where a steel pin is usually referred to as having a hardness rating of about 5.5, somewhere just a little softer than feldspar.

The problem is that the Mohs hardness scale is purely comparative and not objectively set out. Steel pins also don’t take into account the huge variations in steel due to the grade and chemical composition, meaning that it’s of no use for objectively quantifying how hard any one particular steel is.

Luckily, there are a number of ways that steel hardness can be tested with the most popular being Rockwell C (HRc), Brinell (HBW) and Vickers (HV). The testing for hardness means that the individual characteristics of each steel can be measured and set, giving you reliable and useful data about the steel you have, rather than just a general idea of how hard it should be. 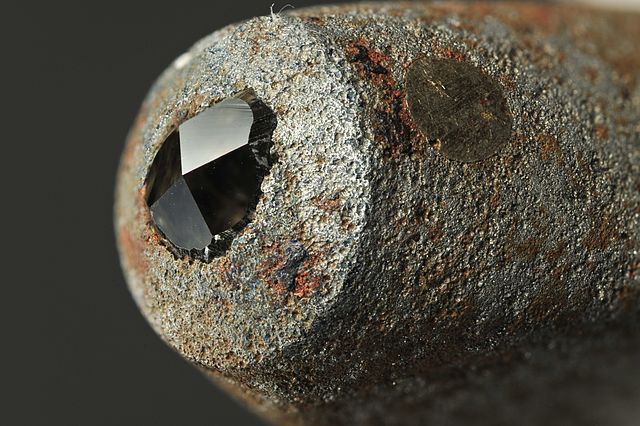 The Vickers hardness test is reported with the HV suffix. The Vickers method uses a diamond with a precise peak. The tip of the diamond is placed against the steel and then forced into the metal for a set period of time and then removed, then the angles that the diamond entered are measured and then converted into the HV reporting number, which tells you the hardness. The reporting is always given as HV number which is determined by the load over the surface area of indentation and not the area normal to the force, and is therefore not pressure.

The Rockwell method measures hardness in already hardened materials, it’s unsuitable for any material in a softened, annealed condition. Rockwell uses a conical diamond which is pushed into the steel, then reapplied with an added force. The depth of the mark is measured against the difference between the first and second forces, which gives the HRc rating.

If you’re looking to test a soft annealed material, or one that doesn’t usually rate highly as a ‘hard steel’, then Brinell is the way forward. For the Brinell method a tungsten ball is pressed against the test piece, then the diameter of the indentation is measured. It’s actually measured twice, for accuracy from two different angles, 90 degrees apart and the average taken.

While generally speaking there are a number of properties that each steel grade has, it doesn’t take into account the natural or organic variances between each batch. By having a way of testing each individual steel product to give accurate, objective results without damaging the metal can be invaluable, especially if you have the ability to test various steels in a variety of states. Now if only it could let us know whether that local tough kid was equal to, or indeed harder than nails.