Metallurgists are generally viewed as sterile scientists in labs or burly metalworkers, but generally aren’t credited with being prone to ‘flights of fancy’ or overactive imaginations. There’s now a possibility, however that metallurgists could be involved with identifying evidence of the real sunken city of Atlantis.

The legend of Atlantis in modern times has taken on its own additional mythology, with some representations of it being a sunken city inhabited by Mer-men, or in the case of one Stargate TV series spin-off, a domed underwater city located in another galaxy. 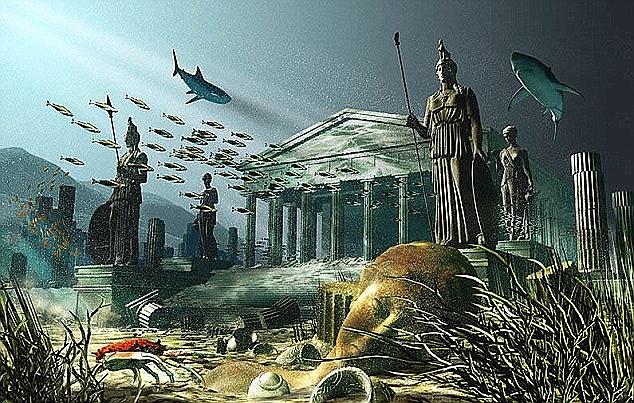 Originally, however, it was the Ancient Greek philosopher Plato, who stated Atlantis was an island superpower that sank into the sea, after dramatically falling out of favour with the gods. They formed a powerful empire and trade was rich in a metal he called ‘orichalcum’. It was highly prized and almost as valuable as gold, it was mined on the island and had a ‘red light’ or red lustre.

This very metal may now have been found on the wreck of a trading vessel that was sunk about 1,000 feet from the coast of Sicily; the ship itself dates to around the Sixth Century B.C. The most unusual factor on this latest discovery is that it’s been found as bars of the ‘precious’ metal, showing that they seemed to be prized.

Initial analysis of the ingots in question shows it is an alloy of copper and zinc, but with traces of nickel, lead and iron, making it similar to brass in some regards. X-ray fluorescence tests show the composition is around 75% copper and 20% zinc with the rest of the material made up from a mixture of the other elements.

If this alloy was produced in the area, then given the age of the ship that carried it, it would fit with other examples of copper zinc alloys from around the same time from around the Aegean and modern day Iraq. There are much earlier examples, which appeared in some Chinese regions.

Although the presence of a metal on an ancient shipwreck is by no means conclusive proof of an entire island city swallowed into the sea, it does bring it slightly closer to a reality. There are some historians who believe that Plato invented Atlantis as a thought-experiment, a way to pose ideas and criticise the powers of Greece without fear of repercussions.

As a real place, inhabited and sunk into the sea, it’s not possible to say. We know that Heracleion, an Egyptian city was lost to the sea around 800A.D. and there’s not much to say that the same wouldn’t be possible for a much lower-lying island. The exciting thing for metallurgists is to help to gather information in a ‘connect the dots’ fashion and gain another insight into how old civilisations were learning to tame the materials they had in order to make useful new tools.