West Yorkshire Steel have been around for a number of years, meaning that we’ve seen and dealt with a great number of other businesses in various shapes and forms. Some of them are still with us, others have divested, changed names and even products and some have closed completely.

One such company, which did most of the above but is no more, is that Staveley Coal & Iron Company, Limited. It was during a search through some old files that an invoice came to light. Firstly, it was noteworthy for being far more intricate and stylish than the kind of invoices that companies send out today, but on further inspection we realised it was already over a hundred years old. 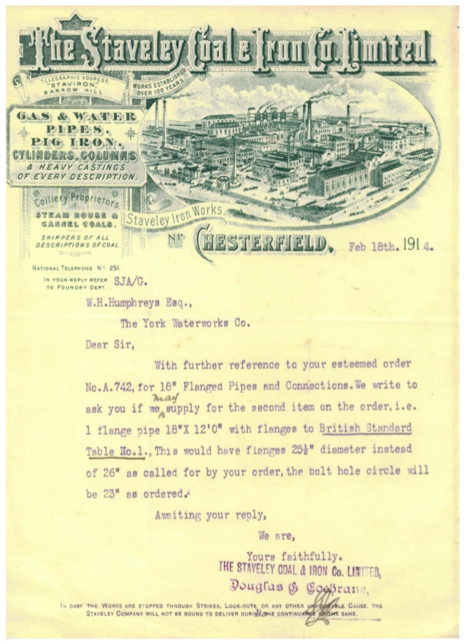 The Staveley Coal & Iron Co Limited was unsurprisingly based in Staveley, North Derbyshire. Opening in 1863, it initially concentrated on iron castings, producing moderate amounts each year. It shortly diversified into coal mining and had several collieries in the local area, but it also expanded to make use of what would have been otherwise waste products, such as coal tar. This introduced the firm into chemical production and distillation, which it continued for a number of years, until the First World War.

It was during this time that they widened their coal tar operations and went all the way up to producing sulphuric and nitric acid, as well as TNT, and by this point they were producing over 700,000 tons of iron castings each year.

By the time the middle of the 20th Century came around, there had been massive upheaval. The business was now producing a range of salt based products as well as its other chemical and iron concerns. The nationalisation of the coal industry in 1946 meant the forming of a number of different brands and companies, including the Staveley Iron and Chemical company, which itself was subsumed into Stewarts and Lloyds Limited, which then went into forming part of the nationalised British Steel Corporation.

Operation began to wind down in the 1980’s when various sections of the site that was originally Staveley Coal & Iron Co were sold off and the company no longer undertook what was previously the core of their business. After a number of years, the only business left was a plant which made the active ingredient in paracetamol, which closed in the early part of the 21st Century.

The site occupied by Staveley Coal & Iron Co was in business for a little under 150 years and was in the very difficult business of producing chemicals for over 100 years of that time. The invoice from a business that is now closed and defunct is a great reminder of how every company relies on a league of buyers and suppliers for success and how intricate the making of industry in Great Britain really is.