Following the initial mixture of shock, worry and moderate annoyance felt by drivers, the crack that closed the Forth Road Bridge in Scotland has been the focus of a lot of scrutiny. The initial findings of the report make for some incredible reading. The potentially catastrophic consequences of the crack in the structure can’t be understated – if the opposite side had cracked in the same manner, the surface of the road could have dropped by several metres.  While some couldn’t understand how it had happened and others relieved that it wasn’t much worse, the authorities set about fixing the problem and holding a comprehensive review of the problem.

That said, for such a large incident and the subsequent effects that it had on people and businesses locally – and the political clashes it caused in the Scottish Parliament – the cause was surprisingly small and simple. A single pin which had seized went on to cause the crack, but nothing in the inspection regime would have been able to pick up on such a fault. The failed section itself had actually been inspected 23 times in the last fifteen years, using mirrors due to the difficult access, but no faults or cracks were found. 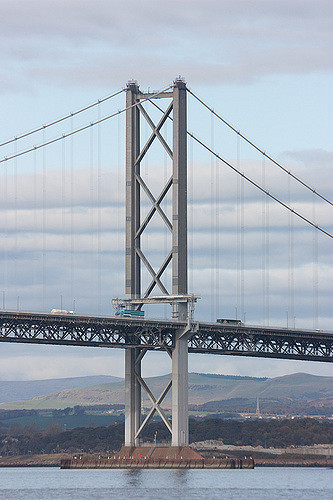 According to Richard Hornby, the engineering consultant who carried out the survey, it’s a possibility that a very high-tech solution of “structural health monitoring” may have picked up on the seized bearing, but it’s not guaranteed. Certain sections of the Forth Road Bridge use this kind of system, but to extend it to the whole of the bridge could cost £10m. Even with such a solution in place over the whole of the structure, even if it had identified the problem, it was only half the battle, as Mr Hornby stated it would be “virtually impossible” to lubricate the bearing the pin from being seized.

The pin that caused the problem had, most likely, been seized for several years, which leads us onto the silver lining of the report. Despite the fact that the pin had failed, it was the quality of the steel that helped to prevent a much larger problem, when weight was passed onto other sections of the bridge that were never meant to feel such strain. Mr Hornby said “It’s only because the steel has been so good that it has lasted so long”.

We have already spoken about the marvel of the Forth Road Bridge and that it was constructed with over 90% British steel, but there’s now another level to be added to that. Great British engineering and materials meant that even when something unexpected happened, the structure itself was able to cope with stresses beyond its designed and expected tolerances. Even when the high winds pushed the failed section beyond its maximum limit so that it failed, the rest of the bridge still held up in good shape until it could be fixed, which really makes us think that British steel and British engineering really are amazing.