There has been a fundamental shift in the last thirty years in how we use the resources that we have available. In order to protect the fuels, minerals and ores that are left, we’ve been furiously changing the way we live and handle refuse to make sure that we’re saving as much of what we have as we can.

While we’re very proud to work with steel, which is up to 100% recyclable and is abundant throughout the modern world, somebody managed to find a way to make some no-longer-needed steel even greener. While on a country walk from a disused railway station, we followed what used to be the line route until it came to a stream. Here, instead of taking up the track to install a footbridge, they’d used the original track as a basis for the wood to create a strong bridge for walkers, saving a lot of effort and energy. 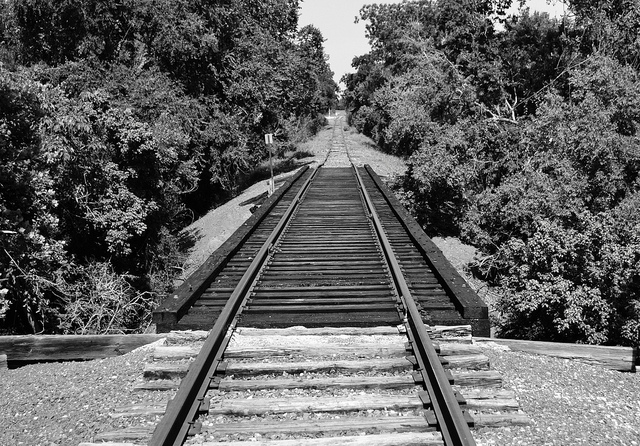 The amount of steel in use on the railways is truly staggering and it forms what is literally the backbone of the UK rail infrastructure. Strangely enough, the composition of the rails used in the UK hasn’t changed since the first steel lines were laid in Derby in 1857 as part of the Midland Railway. Tracks are made from a pearlitic structure based on a carbon/manganese composition, which is made up from a relatively soft ferrite and a hard, brittle iron carbide called cementite. The carbide gives it a good resistance to wear, which is obviously very important!

Over the last 140 years, the fundamental structure has only changed in the sense that the chemical control has become more defined and accurate and the elements that can cause brittle fracture, such as sulphur and phosphorus, are controlled at lower levels. The first British Standard for rail steel manufacture was BS11 in 1903 and, almost as proof of the importance of steel to the UK railways, four of the first eleven BS numbers related to railway steel.

The steel now used, as the 1985 revision states, is one of the lesser-produced steels when compared to other types produced today. There are currently around 10,000 miles of track in the UK but the historic peak hovered around 30,000 miles. Now the UK uses the car more and the road infrastructure has had major investment, there’s been a steady shift away from railways, with only one manufacturer of railway steel currently covering the whole of the UK.

Although we know that steel is the product that keeps the UK ticking over, it’s actually also the one that keeps mass transport moving. From the historic rail-mania through to today, where commuter numbers are climbing and petrol prices have moved some shipping companies to prefer rail freight over road transport, it’s clear that our favourite material is the biggest player on the field when it comes to the railways.