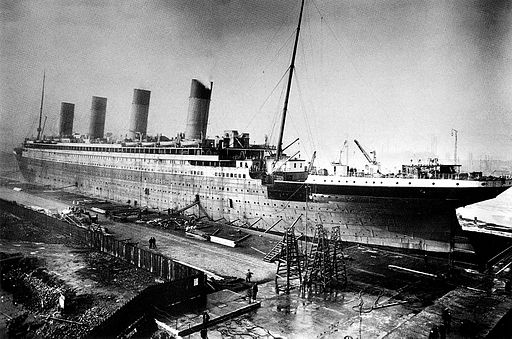 Let’s face it, steel can make for some extremely impressive structures! Every time you see a large and impressive monument, whether it’s a skyscraper, football stadium or a suspension bridge, the underlying frame will almost undoubtedly be steel. You could say that steel is the material of choice for a display of strength!

In its day, the most impressive display of steel was the Titanic, a marvel of engineering in the early 20th Century. Measuring over 880ft long and 175ft high with engines capable of putting out 46,000 horsepower, it was such a colossal project that it quickly gained the title of ‘the unsinkable ship’.

As everybody is completely aware, however, the Titanic was part of the biggest maritime disaster in history, hitting an iceberg and losing over 1,500 people. Ever since, the last hours of the unsinkable ship have been studied and researched several times and many books written about what the exact problems were.

It was only a few years ago, however, that a professor of metallurgy studied that actual steel of the Titanic and put forward a few theories about the part that it played in the disaster. Firstly, steel samples from the Titanic were taken and put through a series of impact tests, which showed that modern steel are vastly superior to the material used at the time. The samples from the Titanic contained high concentrations of sulphur, oxygen and phosphorus, thought to be due to the open-heath furnaces. This could be the reason the hull of the Titanic was shown to fracture and shatter without first deforming.

The brittleness of the steel could be attributed to the very cold temperatures of the sea, which made the steel more brittle and less impact resistant than could’ve been expected. There were reports of extremely loud cracking and banging noises that were coming from the outside of the ship as it sank, likely to be the cracking of the brittle steel as the load changed while the ship was going down.

There’s also been some blame attached to the method of binding the sheet steel together, as they were held in place with hand-hammered rivets. The Titanic was an incredibly ambitious project and the methods of welding in the first decade of the 20th Century were nowhere near as advanced as they are today. The three million rivets that held the Titanic together weren’t sufficient for such a huge structure, but such a large scale project had never been attempted, meaning that they would never have expected the construction methods to be unsuitable.

Compared to today’s big ships, the Titanic doesn’t seem that large – but in its day it was a behemoth! We could think that had the iceberg never struck the hull, the problems with the Titanic would’ve been discovered and picked up over time. As it stands, the disaster that occurred put very sharp focus on the importance of design, materials and construction, meaning that the lessons learned from a tragic event have allowed us to build bigger, better and more impressive steel ships.