If you ask somebody “What is a kilogram?” you might get a series of different answers. Some may be literal and say “One thousand grams”, while others, dependent on their age, might say “About 2.2 pounds”. Some might even crack a joke and say “Killer-gram” sounds like a 1970’s horror B-movie!

When you think of a kilogram, you might think of the brass weights you used to have for balancing scales in school but did you know that while they may be “a kilogram”, they’re not “the kilogram”? That’s right, all kilograms are copies of one original kilogram, which is the global standard for all the others to be measured against.

It’s primarily the concern of metrologists, those concerned with measurement and definitions of basic units, but there’s currently a single weight, known as “the original kilogram” that lives in France. A few miles outside Paris, there’s a cylindrical column of metal, namely platinum and iridium, that was crafted in 1889 and has been kept under three domes of glass to prevent things like dust and other detritus from affecting its mass. 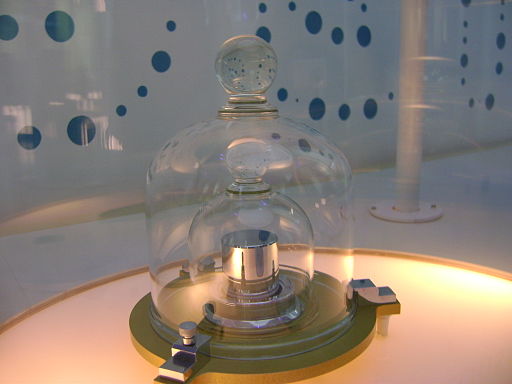 A replica of the prototype of the kilogram at the Cité des Sciences et de l’Industrie, Paris, France.

The original kilogram was made in an effort to make sure that reliable, replicable results were obtained in every situation. Originally, a kilogram was defined as the weight of one litre of water measured just about its freezing/melting point; the problem is that as the weight of the water is relative to air pressure and even altitude, a standardised, external unit was created.

The physical ‘original kilogram’ has served us for around 130 years and has outlasted all of the other unit system standards. Every other SI unit has a standard defined by physics; a metre is distance travelled by light in a vacuum, a second is based upon radiation from Caesium 133 atoms, but we’re still using the French cylinder as the basis for defining mass. The problem – for metrologists, anyway – is that the original kilogram is getting lighter. Since 1889, that platinum and iridium control weight has lost about 50 millionths of a gram, which may seem negligible, but this means that all the world’s scales are over-measuring and will continue to do so as time goes on.

It was decided around four years ago that the ongoing degradation of the standard would be an increasing problem, so it was suggested to use Planck’s constant, which corresponds to the frequency of the electromagnetic wave of a photon and the amount of energy it carries. The electromagnetic force exerted will be measured extremely precisely and won’t change or warp over time, making the standard of mass fixed forever. The amount of work that has gone into building and refining these scales over the last four years, specifically to solve this problem, is immense and very impressive!

As they say, time waits for no man, but in this instance, the problem with weights was time! Although we’re sad to say goodbye to a little 4cm tall cylinder of metal that has served us faithfully for over a century, the future is always just around the corner and we’re glad to know that the weight of our steel will be set and stable now and forever!